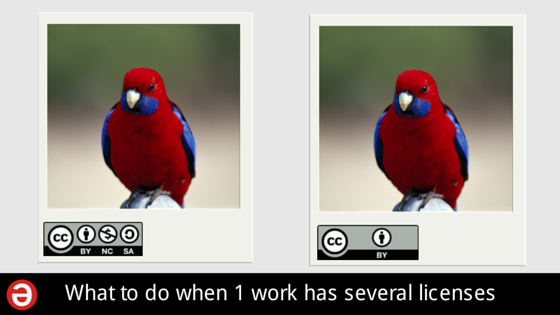 Licenses are present almost every time we share content online. We can be more or less aware of their role, but they are still there. Sometimes we use them so other people can know the specific conditions to use our works; other times, we use them to search songs, images or videos for our own projects.

Lots of platforms such as 500px, Jamendo, or YouTube, ask their users to choose the type of license they want for their content, from among several options. Before making a decision, one should stop and think. Imagine the possible scenarios that a certain license will open and be honest: do they make you feel comfortable?

For example, let’s say we share a photo under a CC-by license, which doesn’t restrict its commercial use. A magazine or a commercial could use our photo, citing us, but without paying any money for it. And since the license allows this type of use we could not complain.
If we are certain this situation doesn’t bother us, then it’s fine. But if we would like to claim our rights and get paid in this scenario, clearly CC-by isn’t the best option. We should choose another license and keep this in mind the next time we upload the photo to another platform.

What happens when a work appears under different licenses on several Internet sites?

It tends to happen that we share the same content on so many platforms that we lose track of them. We change our mind about the license, or we just forget about the one we first chose. We don’t have time to think about long-term consequences and so we pick one just because we feel like it. 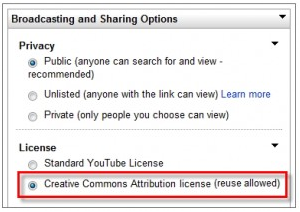 Recently, we received an email from the creator of a video who had registered it at Safe Creative, under a CC-by-nc-nd license. This is a quite restrictive license that doesn’t allow commercial use nor derivative works.
After a while, he uploaded the same video to YouTube. There, he chose a CC-by license, the only one allowed by the platform, which is much more open than the first one. The only alternative that you can choose on YouTube is the “standard YouTube license”, which is similar to saying “all rights reserved” except you allow YouTube to display your video, include ads… etc.

Another youtuber found the video, and used it to create his own. The author of the original video asked us if this was allowed, since the first license he chose specifies that derivative works are not permitted.

When another person finds our work, they must act according to the license that they find. In this case, that was the CC by license on YouTube. Even if the work had been registered previously using a more restrictive license, if there is no link or explanation then how can that person be aware of it?

What if that person finds the work on both platforms? Then they would have freedom to choose the license that is most convenient for them. There is no rule that says they have to follow the guidelines of the most or least restrictive license. Anyway, when in doubt, we could assume that the most recent license has priority, but the ideal option -and the most polite-, would be to contact the author.

How to prevent misunderstandings.

When a work has two or more licenses, a third party may choose whichever they prefer.

In the specific example that we have featured, the CC-by license would probably win, since it is more versatile. But maybe the goals and intentions of an author wouldn’t be so clear if we found that they have licensed their work under CC-by-sa-nc and then under CC-by-nc.

As authors, we must be coherent and cautious. When choosing a license, be aware of the potential uses it allows and restricts. If we change our mind later, for whatever reason, we could cause confusion. By knowing this, we can be more specific and provide more detailed information to prevent misunderstandings from happening.

If we don’t want anyone else to make derivative works using our video, but we don’t care so much about others sharing it as long as certain conditions are met, we could pick the standard YouTube license (which is more restrictive) while clarifying in the description all the uses that we do allow.

Another option would be to include a link to the work’s registration file, so other interested parties can have detailed and reliable information about the work and its license.