This week, from February 22nd to the 28th, we celebrate the Fair Use Week. And it arrives just in time.

Since last week, all YouTube has been talking about this subject, claiming the rights of certain Youtubers to use fragments from movies, video games, etc., in their own videos.

For further information, follow the hashtag #WTFU (Where’s the Fair Use?) on social media. 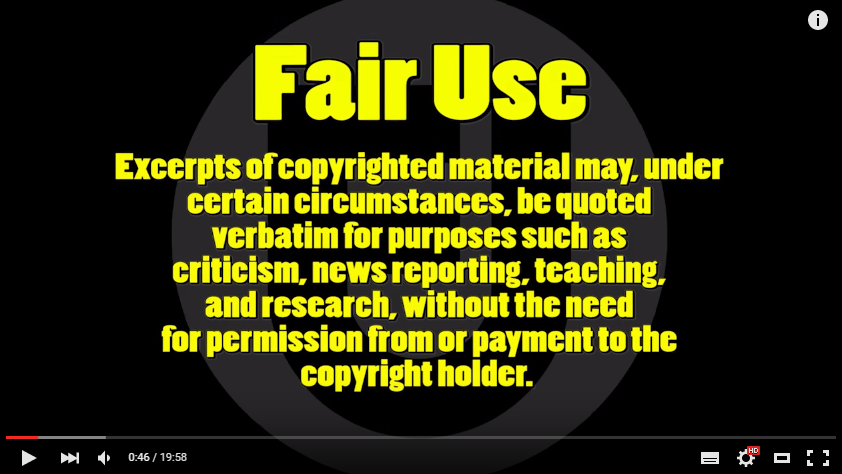 If you are not familiar with this term, Fair Use is a limitation of rightsholders’ rights over a work. It allows other people to use excerpts of it without asking for permission, as long as a series of conditions are met. Some of the criteria frequently used to decide whether or not the use of a fragment is fair use are:

It is a concept that is proper of the common law, and although it is well known in English-speaking countries, that doesn’t mean it exists or is applicable worldwide. Some countries have similar legal concepts, such as the “right to quote” in Spain, but they don’t follow exactly the same principles.

The debate, #WTFU and what is happening on YouTube.

In the last few days, you have probably watched videos by some of your favourite Youtubers talking about the fair use and YouTube’s copyright claims’ policy. This topic isn’t new at all, but it has intensified to the point that many Youtubers feel they can’t tolerate it anymore. Among them, the one who has probably made the most noise has been Doug Walker, also known as the Nostalgia Critic.

Walker, whose YouTube channel has over 400,000 subscribers, has been working as a movie critic on YouTube for over 8 years. In his videos, as it is expected, he employs excerpts of the movies for context and to prove his points. Therefore, he is one of the many Youtubers who work under the fair use and had to face copyright claims since the very beginning of his YouTube career. During the last month, he joined the complaints and uploaded a couple of videos explaining the problem and how it has been getting worse.

Last week, he uploaded his #WTFU video, which has been broadly shared and commented.

In this video, he defends content creators like himself, explains the issue, how YouTube’s copyright policy works, their system based on “strikes” and “claims”, what is the DMCA (Digital Millenium Copyright Act) and ultimately, what this all means in practice.

Summed-up, when a Youtuber receives a claim or a strike for copyright issues, they are “guilty until proven otherwise”. This has immediate consequences for their channel, videos, and monetization. The complainant can even start receiving money from the video’s ads instead of the Youtuber while the conflict isn’t solved. Since they have up to 30 days to respond to the Youtuber after they indicate that the copyright claim isn’t fair, it can take a long time until the Youtuber can monetize the video again. Also, whilst 3 strikes are enough to shut down a channel, there are no consequences for those who send unfair copyright claims on a recurring basis.

Despite all of this, the main problem is not a “fight” between independent creators’ freedom of speech and big studios who want to be in control and censor all criticism (although there are isolated cases where this is true). The main issue is the automated censorship systems, such as Content ID, developed by YouTube to make copyright complaints agiler.

Content ID compares the original content, provided by the rightsholders, with the content uploaded by all other users to YouTube. This allows them to detect copyrighted material even before it’s made public, at least, when the infraction is flagrant. Nonetheless, there are many tricks and techniques to confuse the system and upload videos of movies or other content protected by copyright, so Content ID can’t detect these videos so easily. They are uploaded, and Content ID keeps searching, warning rightsholders when there is a potential infraction. Sadly, in this half-automated, half-manual process, all sorts of videos are censored, including those which are fair use.

There is not an easy solution. Non-authorized uploads of copyrighted content is a real problem that YouTube and all other video platforms face, and they need tools to detect this protected material and delete it. But it is clear that the current system is failing.

We would like to advice you to watch the video response of Jonathan Bailey at PlagiarismToday, in order to know the perspective of someone who has been on both sides of the coin in this debate.

According to PlagiarismToday, YouTube will never be a safe place for creators who seek protection from the fair use, and “that’s the end of it”. But he also affirms that this isn’t a battle between evil studios who seek to censor and end criticism. It is a fight against a real problem where one of the side effects has been censorship.

This is about YouTube implementing a system to automate a burdersome process to them, that is imperfect  and is never going to be perfect. It’s that simple- There are no villains here. (Jonathan Bailey)

Keeping both perspectives in mind, what do you think should have the priority? The defense of copyrights, or freedom of speech? How could automated tools like Content ID be improved?

Do you think the solution is near, or rather, that YouTube and the big video platforms are doomed to be unsafe for reviews, criticism, and satires?

One Reply to “What’s “Fair Use” and what’s going on at YouTube?”