There is little doubt about the legality and legal effectiveness of Safe Creative´s private copyright registration. When dealing with copyright, any evidence, public or private, is admissible; being the one provided by Safe Creative very robust (it uses triple fingerprinting “hash” and double timestamp)…

Most registries, including those offered by the states, have the basic value of a presumption and can be challenged by any rebuttal allowed in a trial. *

If before sharing and disseminating a work, authors record their authorship at Safe Creative it will be impossible for anyone else to make another certificate with the same technological robustness and at an earlier date.

All signatory states of the Berne Convention included in their laws that the generation of copyrights corresponds to the author by the mere fact of the creation of a work, so in all of them is therefore legal and valid any authorship evidence based on technology, such as the one Safe Creative provides. 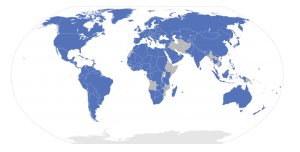 As an example we have seen in previous blog posts the policy development confirming its validity in law as Argentina or Mexico.

With regard to the Spanish law we want to share this concise report by Borja Adsuara, law professor, lawyer and legal advisor in the field of information technology that supports the usefulness and legal validity of the registration at Safe Creative.

Berne Convention for the Protection of Literary and Artistic Works (WIPO) of 9 September 1886.

Royal Legislative Decree 1/1996, of 12 April, approving the revised text of the Law on Intellectual Property, the regularizing, clarifying and harmonizing the existing legislation on the subject.

281/2003 Royal Decree of 7 March, Regulation of the General Registry of Intellectual Property is approved.

REPORT
1. The Berne Convention for the Protection of Literary and Artistic September 9, 1886 Works, says in its Article 5: Rights guaranteed (as revised Convention held in Berlin in 1908, contained in the present Act of 1971 Paris Convention): 2) the enjoyment and exercise of these rights shall not be subject to any formality …

2. Spanish Intellectual Property Law (Royal Legislative Decree 1/1996, of April 12), in Book One (of authors rights), Title I (General Provisions) states: Article 1 Incurrence: Intellectual Property of a literary, artistic or scientific work is for the author by the mere act of its creation.

3. And later, the Spanish Intellectual Property Law, in Book III. (From the protection of rights under this Act), Title II. (The Registration of Intellectual Property) provides: Article 145.3: “It shall be presumed, unless proven otherwise, that the rights are registered and belong to their owner in the form specified in the respective record.”

4 .Regulation of the Spanish Intellectual Property General Registration (Royal Decree 281/2003 of 7 March) says the same in his 27 Article. Effectiveness of registration: 1, unless proven otherwise, it is presumed that the registered rights exist and belong to their owners in the form specified in the respective records.

5 In the preamble to Regulation (2nd paragraph) states: “In addition, a main feature of this registration institution is of a voluntary and non-constitutive character of the inscriptions for the protection that the copyright law gives which reinforces the idea that the “official” registration rights protection is not necessary.

2 It is not necessary, therefore, the recording in it of the existing intellectual property to be protected, and any evidence admissible in law can be provided to evidence the authorship.

3 The existence of a public register does not affect the legality of private records, which have the legal effectiveness of a private document, exist throughout the world and are recognized and valued by WIPO.

* Notice that the United States Copyright Office is mandatory for those US citizens that wish to be able to sue in case of copyright infringement and opt to statutory damages and other advantages. For other citizens of other countries also registration is mandatory if they wish to take advantage of this in the USA.

View all posts by admin