Safe Creative improves the registration certificate, transforming it into a technically irrefutable true registration evidence, which validity, based on the technology used, is independent even from Safe Creative.

The Spanish company, which pioneered the Copyright Registration on the Internet offers, starting December 13th, a twofold registration full evidence that together with the original file consists of: 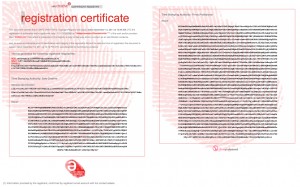 It’s definitely an element of proof of absolute solvency, independent of Safe Creative, which the authors may download or automatically receive to use as evidence of authorship.Safe Creative is defining the digital registration as the most suitable for the Internet, because unlike traditional systems, those are not based on the authority of the entity or person certifying the records, nor depend on them to prove it, but the proof of registration now becomes an indisputable piece of evidence that is necessary for authors to enforce their copyrights in case of plagiarism, misappropriation or misuse.

In the words of Juan Palacio, CEO of Safe Creative: “These changes represent a quantum leap for our users, who increasingly value for their creations the security, autonomy and independence a technology based registration service can provide. In short, a sound system for the digital reality. “

View all posts by admin